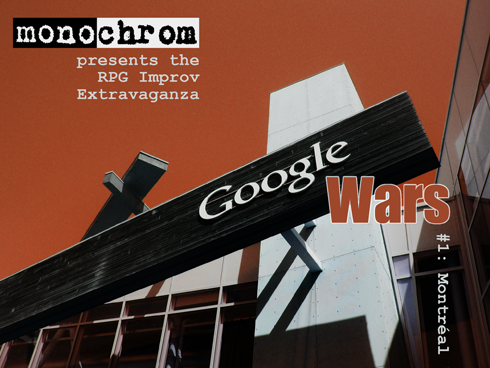 The 90-minute performance will feature Johannes
Grenzfurthner, member of the Austrian art collective monochrom, as the
Game Master, and four Montréalers from the creative scene as
improvisational players. Local illustrators will “live draw” the
imaginary scenes and characters, in real time. In contrast to
traditional Pen&Paper RPGs, the rules will be quite simple, and in
some situations completely replaced by a spontaneous storytelling
process. After all, it’s entertainment!

Increasing tensions between China and Google escalated in June 2011, as
the People’s Republic attacked the company’s headquarters in Mountain
View, California (USA), with long-range warheads. The so-called “Google
Wars” (June 2010 to March 2012) engulfed the whole world in a chain
reaction.

Within a few months, large swathes of land were
destroyed and rendered barren, devoid of all life. Europe, Asia and
America suffered terrible losses. All major cities as well as 95% of
the population were eradicated in the tactical nuclear infernos.

Because
of its extreme economic irrelevance, Montréal is spared the woes of
war. As the last remaining (somewhat) intact city of the North American
economic sphere, it is a beacon of semi-civil civilization. In 2014
Quebec annexes the North-Eastern remains of the United States, now
jokingly called “Les États-Dévorés.”

It is summer of 2021. Life
in Montréal strolls along on its path. The radioactive rain is a bit of a
nuisance, though. Especially for maple syrup.