Director Johannes Grenzfurthner is guest star at Duncan/Channon’s Toast of the Tip!

He’s an artist, writer, curator, director, professor, all-around instigator, and founder of Monochrom, the notorious Viennese art/technology/philosophy powerhouse. His projects have been featured in The New York Times, Der Spiegel, San Francisco Chronicle, CNN, Slashdot, Boing Boing, LA Times, NPR, Gizmodo, Wired. He (or his lookalike Comrade Chrusov) have been spotted at SXSW, TEDxVienna, Maker Faire, Google’s Tech Talks, Ars Electronica, Mozilla Drumbeat Barcelona and underground hacker conferences around the world. From translating dense political philosophy into internet memes to composing pop musicals about banking software to running the first (and, inevitably, leading) festival concerned with cocktail robotics, Johannes and Monochrom constantly seek the right medium for their message(s). Among other projects, they’ve established a one-baud semaphore line through the streets of San Francisco, buried couples alive in plush surveillant coffins and cracked the hierarchies of the art market with a series of elaborate pranks. Now they are taking on the silver screen with the Kickstarter-funded story of Sierra Zulu, the last Soviet micro-state.

As our first Toast of the Tip honoree of the fall, Grenzfurthner will share his global adventures in subverting subversion and discuss some of the oddities of storytelling and filmmaking in a digital age.

There will be a list. To be included, RSVP by the morning of 26th to: moc.nonnahcnacnudnull@pvsr

There will be a German language presentation about Sierra Zulu in Amstetten. 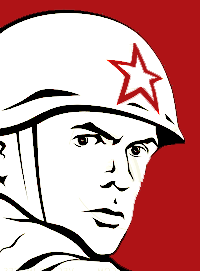 Our director Johannes Grenzfurthner will talk about traditional narrative cinema, its problems and its promise — and Sierra Zulu.